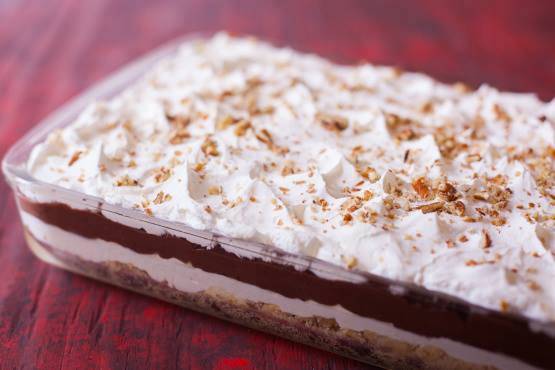 This is great dessert for any time of year. You can easily change the flavor by substituting a different pudding in place of the butterscotch (we also like chocolate a lot).

When I have made this dessert I have only used melted butter flour & the pecan pieces for the crust and have always used 2 different kinds of pudding.

This cake has been made in our family for years. Instead of using butterscotch I use one box of instant vanilla pudding and one instant box of chocolate along with the same amount of milk.. YUM!

This timeless recipe has been around such a long time (I ve been making this since the early 70s!) not just because it s easy and versatile but because it s awesome good. It also serves an army!

Mix first thee ingredients.
Add fine chopped pecans.
press into 9×13 pan.
Bake shell at 350 for 15 min.
Soften cheese, then blend in sugar and Cool whip.
Spread over cooled crust.
Make pudding as directed.
I like cooked pudding best but you can use instant.
You can also use 2 small packages.
And any other flavor you like.
Spread on top.
You can sprinkle chopped pecans or chocolate ants on top.
Refrigerate.