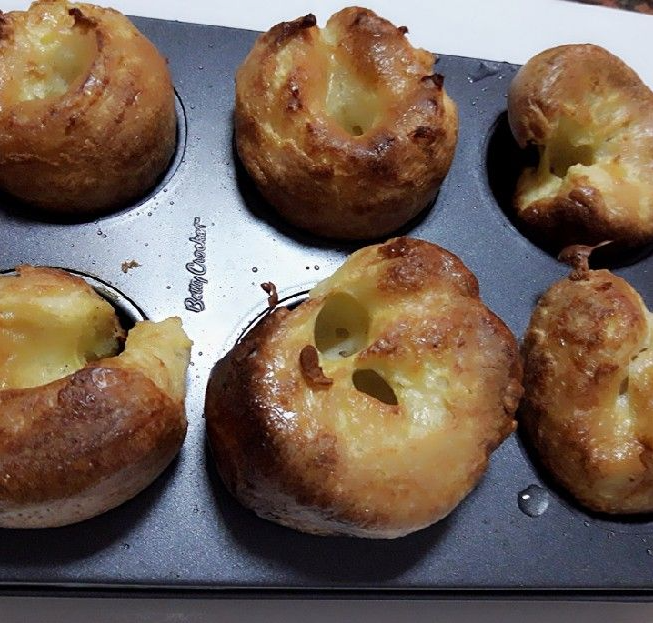 Not a custard, Yorkshire pudding is more like a cross between a soufflé and a cheese puff (without the cheese).

It looks like a very thin pancake batter, which you pour into a hot casserole dish over drippings of roast beef or prime rib.

It then swells up like a chef’s hat, only to collapse shortly after you take it out of the oven.

Because it’s loaded with beef fat (read fat) or butter, or both, Yorkshire pudding is probably not the thing you want to eat regularly if you’re watching your waist circumference.

But for once a year, a delicacy, served with roast beef?

Yorkshire pudding is traditionally prepared in a single pan (more traditionally still in the pan that collects the drippings from the roast from above). You can also make a popover version with the same batter and drippings in a muffin pan or popover.

1. Whisk the eggs and milk in a large bowl until well blended. In another bowl, mix the salt and flour and gradually add them to the egg mixture. Whisk quickly until the flour is incorporated and the mixture is smooth. Cover with plastic wrap and let stand for at least one hour, but no more than three.

2. Collect fat from the roast If you are collecting fat from a fresh roast, the best time to do so is after the roast has been in the oven for an hour, and while the roast is resting. Whisk 1 tablespoon of beef fat into the batter until it is bubbling and smooth. Transfer the batter to a large measuring cup or pitcher.

3. Measure 1/2 teaspoon of beef fat into each cup of a standard muffin pan. Once the roast is out of the oven, set the oven to 450 degrees. Place the pan in the oven to heat for 3 minutes. Quickly remove the pan from the oven, close the door, then distribute the batter evenly among the 12 muffin cups so that they are about 2/3 full.

5. Remove the pan from the oven and pierce each dough with a skewer to release the steam and prevent it from collapsing. Serve immediately.