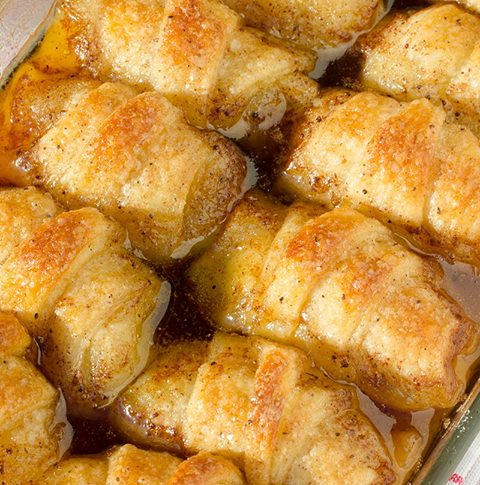 To make these puppies, you just wrap crescent roll dough around slices of apple, pour a mixture of melted butter and sugar over them, empty out some Mountain Dew from the can on top of that, sprinkle with cinnamon, and bake. And ta-da! You’ve got yourself a crowd-pleasing dessert.

With such little effort for a praise-worthy dessert, this recipe has definitely got me rethinking all my complicated dessert recipes. What’s the point in laboring in the kitchen for hours if something semi-homemade does the job?

I’ll definitely be making these again. Perhaps a cream cheese and berry filling would be pretty good too. Or maybe peaches …

If you are making these ahead of time, after baking, pour out as much of the sauce that’s in the pan (there will be quite a bit) and save it in a separate container. This will keep the dumplings from getting soggy. When you’re ready to serve, warm the dumplings in the oven for a few minutes and warm the sauce in the microwave. Serve it all with scoop of vanilla bean ice cream.

1 large apple {I used a Fuji- any apple will do, tart is better}

Slice the apple skin off as well and set aside.

Roll each apple wedge in crescent roll dough starting at the wide end.

Pinch to seal and cover apple and place in the baking dish. {This is easier if you first pat the apple wedge dry, then wrap dough around it.}

Melt butter in a small saucepan and stir in the sugar and cinnamon. Heat, whisking to combine.

The mixture will slowly combine and thicken. When it’s thickened, remove from heat and add vanilla.

Pour cinnamon mixture over the apple dumplings. Pour soda over the dumplings. Bake for 40 to 45 minutes in the preheated oven, or until golden brown!!!