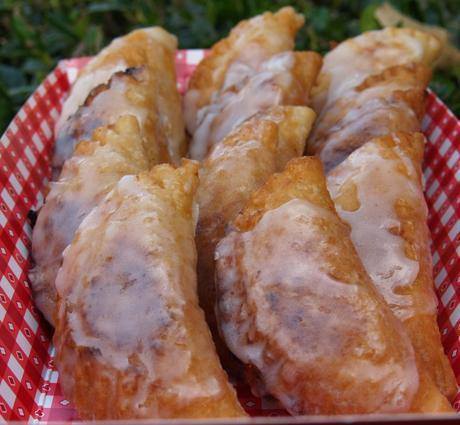 What’s the one thing more American than apple pie? Quiet, dude who knows apple pie is actually German. Fried apple pie, thanks dude who has his priorities in order! For this July 4th (or, hell, any time you want to be an awesome American) whip up this crispy iconic dessert from NYC bistro Lexington Brass, complete with graham cracker ice cream (!) and prepare to seriously rival the dude manning the ribs on the grill. You know, the one who thinks apple pie is German. Now fire up that deep-fryer and break out the ice cream machine. We’re getting fancy.

Brick dough can be found in Middle Eastern grocery stores (and is definitely worth seeking out) but puff pastry or even phyllo will do in a pinch.

Combine apples and water in saucepan; bring to a boil. Cover, reduce heat, and simmer for 30 minutes or until tender. Remove from heat and let cool, mashing slightly if pieces are large. Stir in sugar and butter; set mixture aside.
If using fresh apples: For the filling: Add 2 TBS butter to a large saute pan and melt. Add 4 peeled, cored and chopped apples, sugar, cinnamon, and 1 tsp lemon juice and cook over medium heat until the apples are soft, about 15 minutes. Remove from the heat, mash slightly and cool.)
Roll each biscuit into a 5-inch circle on a lightly floured surface. Place about 1 tablespoon apple mixture on half of each biscuit circle. To seal pies, dip fingers in water and moisten edges of circles. Fold in half, making sure edges are even. Using a fork dipped in flour, press edges firmly together to seal.
Pour oil to a depth of 1/2 inch into a heavy skillet, or use deep fryer. Fry pies in hot oil (370°) over medium-high heat until golden, turning once. Don’t rush it because you want to make sure the biscuit is cooked completely through.
Drain well on paper towels.
Makes 10 pies.