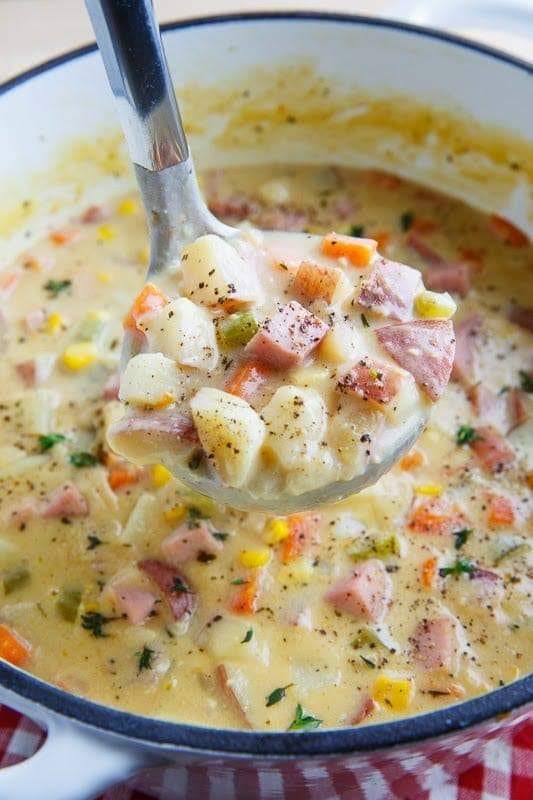 Despite the fact that it is spring we had snow here for Easter so the first thing that I did with my leftover ham was to make a comforting and creamy ham and potato corn chowder! I wanted this chowder to be full of vegetables so I started out with onions, carrots and celery before adding some garlic, thyme and flour as a thickener. For the liquids I used a tasty ham broth and milk rather than cream to keep things a little lighter. The ham, potatoes and corn filled the soup out and as I often do, I added some white miso paste for even more flavour and a touch of umami. Not only is this ham and potato chowder really easy to make but it takes less than 30 minutes so it’s perfect for any night of the week and if you make a large batch then the leftovers are even better for lunch the next day! Here’s to hoping that it starts warming up soon but until then I have some ham and potato corn chowder to get me through these chilly early spring days!

HOW TO MAKE HAM AND POTATO CORN CHOWDER?

1 pound and half of the diced potatoes.

Salt And Pepper To Taste.

I heated the oil over medium heat in a large saucepan, I added the diced onions, diced carrots, and diced celery and I cooked for around 10 minutes until tender.

I mixed in the garlic, the chopped thyme, and flour or rice flour and simmer for around 3 minutes until the flour is lightly browned.

I stir in the broth gently, then I added the milk and diced potatoes, I brought the mixture to a boil.

I reduced the heat and simmer for around 12 to 15 minutes until the potatoes are tender.

I added the corn and ham, I cooked for 10 more minutes until heated, and I season with salt and black pepper.