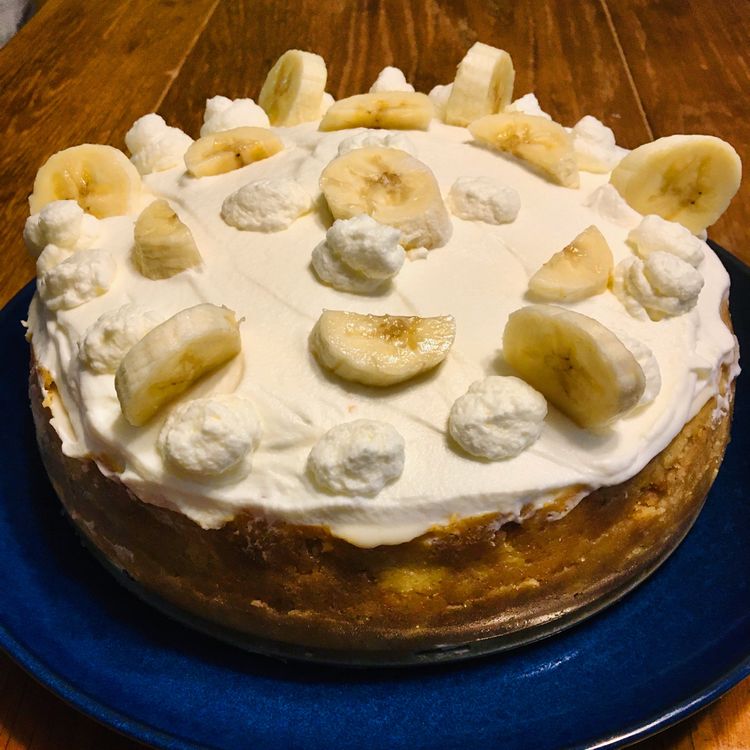 A friend of mine couldn’t make up her mind between banana cream pie and cheesecake for her birthday, so I came up with this rich and creamy concoction. The vanilla cream topping takes a little extra time to make but it really completes the dessert!

Fabulous recipe! hyatttm included every step to prepare this cheesecake making it easier for anyone who has never before tried to make a cheesecake. It came out perfect the best consistency of any I ve made!

If you like bananas and banana desserts you will love this cheesecake. I only made the crust and the cheesecake (no topping) and used 4 bananas and no banana liqueur.

Excellent. Everyone about 15 people absolutely loved it. The only change I made was to use vanilla bean instead of extract in the topping.

this was amazing! Everyone loved it and thought it was delicious. I did make some changes though. Very minor however. I put 5 bananas in the cheesecake mixture in order to make it thicker.

Step 1: Prepare the oven and preheat to 325 degrees F.

To Make the Crust:

Step 1: In a medium mixing bowl, add in all the crust ingredients. Stir until well mixed.

Step 2: Transfer the mixture into the pan and press on the bottom and the sides.

Step 3: Place inside the preheated oven and bake for 10 minutes. Remove from the oven and allow it to cool.

Step 4: Ready the moat pan and reduce the heat of the oven to 300 degrees F.

To Make the Cheesecake:

Step 1: Place the sugar, flour, and cream cheese in a mixer. Beat on low speed until well mixed.

Step 2: Add in sour cream, banana puree, and one egg at a time. Beat until well combined and smooth.

Step 3: Transfer the mixture into the crust.

Step 4: Place inside the preheated oven and bake for 90 minutes.

Step 5: Turn off the oven and let it sit inside the oven for 30 minutes.

Step 6: Remove the cheesecake and let it sit at room temperature for 30 minutes. Then place inside the fridge to chill.

To Make the Bavarian cream:

Step 1: In a small mixing bowl, add in the milk and gelatin. Stir until well mixed.

Step 2: In another mixing bowl, add the yolk and whisk until foamy.

Step 3: Place a saucepan on the stove and turn the heat to low. Add in the sugar, vanilla, and cream.

Step 4: Gently pour in the hot cream into the egg mixture. Put the mixture back to the saucepan and heat until it reaches 160 degrees.

Step 5: Transfer the gelatin mix into the saucepan and stir until well mixed.

Step 6: Transfer the custard into a small mixing bowl and let it sit on a large mixing bowl with ice. Allow it to cool.

Step 7: Whisk sugar and cream until stiff peaks form then add into the cooled custard.

Step 8: Spread the mixture on top of the cheesecake. Place inside the fridge and chill for hours.

To Make the Cream:

Step 1: In a small mixing bowl, add in the sugar, vanilla, and cream. Beat until well mixed.

Step 2: Spread on top of the sliced bananas and cake.

Step 3: Sprinkle the rest of the Nilla Wafer Crumbs.